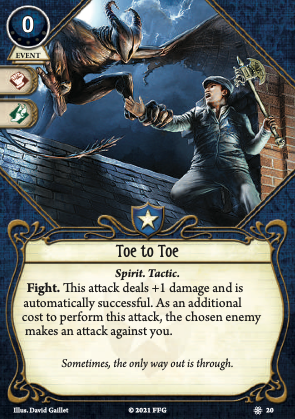 Does this work with drawing thin? Is this still considered “initiating a skill test”? If so this’ll be even more amazing with Calvin, because then you can just boost the difficulty of the test to draw cards or gain resources, while still knowing that you will win. Additional plus of using this in conjunction with Counterpunch to just annihilate a monster in a single action.

LilSmac · 7
Yes, this works with Drawing Thin and you could commit Vicious Blow to add damage. This trick also works with Miss Doyle. — elkeinkrad · 316 10/1/21
Wait, where's the skill test you're initiating here? I don't get how this works iwth Drawing Thin, or how you can commit skills — Lailah · 1 7/6/22
2

Automatic stuff is good. Resist the attack with some soak because I'm not actually sure you're allowed to cancel it with cards like Dodge, because that's cancelling the "cost of taking at attack.

Note, this might seem a steep and risky price to pay for one hit, compared to playing Monster Slayer or One-Two Punch, but automatic hits are worth their weight in gold in hard and expert, where the chaos bag is like a coiled snake, full of terrible tokens.

Most incredibly, it's level 0, a whole heap of charactes can sneak this into their decks to reap the benefit.

Tsuruki23 · 2255
Amazing early game tech for . . . I forget his name, the Cursed Survivor who starts with all 0's. — OrionJA · 1 9/27/21
Calvin. — supertoasty · 27 9/28/21
I don’t see why you can’t use dodge against this… — gazzagames · 7 9/30/21
Also I think this exhausts the enemy as it is an attack not an AOO… which might also be useful… — gazzagames · 7 9/30/21
You can't use Dodge because being attacked is the cost of the free successful Fight. If you cancel the cost, you haven't paid for the product. (You can, however, cancel the damage or horror from the attack.) — supertoasty · 27 10/1/21
@gazzagames enemies do not exhaust because they attack, they exhaust as part of the enemy phase, which just happens to be after they attack in that phase. This card, and anything else that causes attacks of any kind, does not exhaust enemies unless otherwise specified. — Lasiace · 16 10/6/21
enemies do exhaust. Only AOO will not cause enemy exhausted. Other attack actions no matter what phase will cause the enemy exhausted~ — BoomEzreal · 5 10/13/21
See the FAQ, p — codemonkey · 1 10/18/21
Bloody hell...p. 13: Do enemies exhaust after making attacks of opportunity, retaliate attacks, or other attacks (via card effects)?No. Enemies only exhaust after attacking if they perform an attack during step 3.3 of the enemy phase. Unless otherwise noted, all other enemy attacks do not cause that enemy to exhaust. — codemonkey · 1 10/18/21
If you are able to defeat a monster with your attack when using this card, does the monster get to attack you back or is that part of the card cancelled? — HandsomeDust · 1 10/19/21
Being attacked is part of the cost, so it happens before you even get to do your attack. — Lasiace · 16 10/22/21
So another question then can you use counterpunch or similar effect on this attack… assume you can snd then get your auto success attack from toe to toe…. — gazzagames · 7 10/26/21
Yeah, counterpunch should work fine, since you're just interrupting an attack and not cancelling it or anything like that. — Lasiace · 16 11/4/21
2

Daniela can use Toe to Toe on health damage enemy to instantly obliterate it without touching the chaos bag, by having the additional cost go to her Guard Dog. Spilled horrors can go to Precious Memento (Former Life) and spilled damages on Daniela if enemy hits harder than 1 damage required for the dog. Dog bites for 1 damage. Dog is considered "you". She is angry her dog is hurt and auto-whack for 1 damage. Then this Toe to Toe fight deals 2 damages, to the total of 4 damages which should kill most annoying enemies. The dog gets Bandages. Memento can be restored perhaps with Relic Hunter + Bangle of Jinxes to help over-succeeding, which would got jinxed as a part of Toe to Toe. The test to over-succeed can be the next Fight or Earthly Serenity (4), which its difficulty is 0 vs Daniela's 4 , which would also restore some chip damages/horrors off Daniela taken while distributing leftovers from the dog and the stone. Handy!

How does this work with swarming enemies? Let's say Daniela is facing a swarming 2 enemy (that's 3 enemies total), can she chooses just one of them to attack her to play this card, or the 3 of them?

Balin · 27
x) Each swarm card attacks separately when enemies attack DURING THE ENEMY PHASE. x) Each swarm card can be attacked or dealt damage separately, but the host enemy cannot be defeated while it still has swarm cards underneath it. x) The host enemy and all of its swarm cards move, engage, and exhaust as a single entity. => So, no. A swarm enemy does not generally attack as a single entry. It's always usefull reading the keyword in the Rules Reference to clear this questions. — Susumu · 217 11/12/21
Do you mean it's just one enemy attack in this case, or three attacks total? I didn't fully understand your answer, sorry, English is not my first language — Balin · 27 11/12/21
Of course, this does not mean, that you will not get an AoO from each swarm card, should you trigger it. But that's because each swarm card count as a single enemy. You won't get an attack from other enemies, you are engaged with, from this card. Just the one, you are attacking. And you can even put extra damage on other swarm cards, without them having attack you, hence the swarm keyword allows that. — Susumu · 217 11/12/21
Ok, now I got it. Thanks! — Balin · 27 11/12/21
Swarm enemies attack each of there own. If the last paragraph I quoted would be "The host enemy and all of its swarm cards move, engage, ATTACK and exhaust as a single entity", this would be different. — Susumu · 217 11/12/21
Hey, if each swarm card attacks in enemy phase, so Daniela can hit each swarm and host with her ablility? Am I right? — Pawiu14 · 109 11/12/21
Yup — MrGoldbee · 1242 11/12/21
Does the enemy get exhausted after the attack? — Atshen · 1 5/6/22