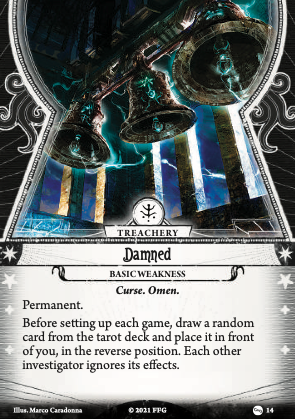 Since this only applies to you and the tarot deck's contents are known, there is a list of effects you might see from this weakness. I've reworded them accordingly here, and have categorized them in groups based on the general typing. I've tried to put the groups in order of least-to-most threatening, but this can greatly vary depending on the character, build, or mission.

The full effect list is varied enough that this is bound to be a very swingy weakness. In general, I would say the first three groups (7/22) are fairly negligible, the setup group (5/22) will hit most characters fairly hard, and the rest (10/22) will vary greatly depending on the exact scenario and character. All in all, I think the overall effect of this is fairly average for a weakness, though at least most of the time, you'll have one less weakness in your deck to draw.

Ruduen · 716
How I can replace the highest non-negative token in the chaos bag with a skull in multiplayer ? The card says "each other investigator ignores its effects" ? Two chaos bag ? — Murloc · 1 4/2/22