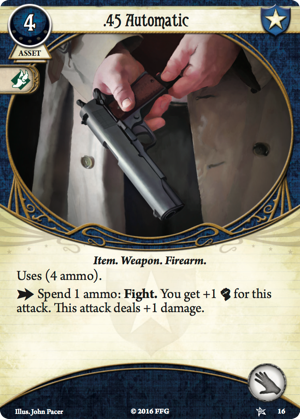 The .45 is something of a template weapon: 4 resources provides 4 ammo, each shot giving +1 and +1 damage. That breaks down to 'pay 1, get +1 and hit for 2' which is no bad thing at all. Of course, the cost to play the card is not insignificant. If you draw the .45 late in a game, particularly if you're already set up with another weapon, perhaps even a different firearm, you might struggle to afford this. Yet the cost is a hallmark of the .45's reliability: there are no conditional clauses on this weapon. You get bang for your buck and each shot you take gives you the same bonuses.

The .45 also provides some of the boons we'd associate with a staple, reliable firearm. It can be reloaded with Extra Ammunition, have its ammunition double with Contraband (as though you had a second clip sitting in your pocket, useful for those times when you don't have a duplicate .45 ready and waiting...). We've also, at point of reviewing, seen two enemies who care how you attack them. This marvel rewards keeping your distance; something in the sky fears firearms. Neither of these last details are a reason to make the .45 a "must-include" in a dedicated combat-deck, but they are certainly points in its favour.

The icon on the card is a slight disappointment, in so far as if you're set up with another weapon, particularly as a dedicated fighter, you're probably not trying to evade too much. Perhaps an upgraded .45 might have and and provide further utility.

The three investigators who can take the .45 (discounting the fact that all Dunwich investigators can, plausibly) are Roland Banks, "Skids" O'Toole and Zoey Samaras. All have respectable , and appreciate the bonus from the .45. All have access to other guardian weapons, but will happily include the .45 to fill out the weapon slots of their deck. I suspect it will be some time before this card is not given consideration by any would-be fighter.

zozo · 2748
Great review! Nice to see a card like this in the core set, a real no frills weapon they can slowly introduce spins on for particular builds. Also like calling out the particular enemies; at the moment, you're never disadvantaged using this, though that may of course not always be the case! — unitled · 2158 3/2/17
Good review! It's biggest in faction competitor is of course de Machete. I really like the minor differences between both weapons, which give them really different flavours. Generally, I think the Machete is the better weapon, but in a build where you got lots of cash to spend and expect to face multiple enemies at the same time (more often in group play than solo play) the .45 has an egde over the machete. — Heyenzzz · 5284 3/3/17
Good to know. Thank you. Keeping the .45 automatic — andreimihai.tudor · 1 12/3/21