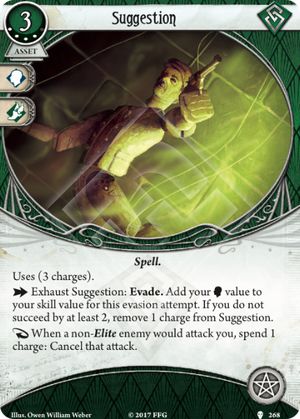 This card gets very broken with Sefina especially when combined with pickpocket lvl 2. One of the best combos we've found so far for it. Keeping elite enemies locked down whilst the team gets work done

Vicoforbes · 18
Certainly an effective combo, but given that 6 XP worth of cards are involved, I'm not sure it's fair to call it broken. But yes, I really like this for Sefina. — CaiusDrewart · 2561 4/16/18
Absolutely awesome with Sefina. Good with Akachi, though there's a lot of competition for her Arcane slots. Unconvincing for Skids and Jenny. — AndyB · 887 4/25/18
Why is it that good on Sefina? Just because she has 4 willpower? — QDI · 1 7/28/18
4 willpower and 4 agility. This adds willpower to the evasion check, so added to agility, it totals 8. — Lemmingrad · 15 7/31/18
But is it worth 4 XP? Cat Burglar and Elusive already provide guaranteed evasion and action compression to boot. — QDI · 1 7/31/18
Put that card in a Marie Lambeau deck and she gets a free evade action at 7 every turn as long as she has a doom on a card she controls. Like a Finn! — Ezhaeu · 40 2/12/19
this is probably a good way for Sefina to trigger win-by-2 type effects like Quick Thinking. Starting at 8 is already good, but Sefina also has access to others ways to boost agility and willpower. — Zinjanthropus · 185 3/20/20
1

It's a bit hard to write a review on a card that's not printed yet. Bittersweet exercice : it does not settle my desire to test it, and what's more, I can be victim of my own hype of the card.

This card has two effects, which consumes charges (or not). Let's start with the 1st one. You add your agility to your willpower for an escape. If you don't succeed by at least 2, you remove one charge from that spell. It's a sort of boost for escaping. The second effect triggers when you are attacked : you remove 1 charge from the spell and cancel the attack. If you only consume charges that way, it means it can cancel up to 3 attacks.

I am a only playing Mystics and Rogues so far, and I can see a truly amazing potential for Akachi Onyele (see my quick review/thinking on Akachi) and Sefina Rousseau (full review of Sefina). For both of them, Suggestion gives a basic 8 in escape. It works the same as lockpicks and thus I expect to not use too many charges on suggestion, so I can use its 2nd effect to the fullest. Both of them have troubles when it comes to staying power. Akachi can only rely on a few spells like Shrivelling and will have to fight (while being bad at escaping) and Sefina will mostly use event like Backstab to burst or run from mobs. Sooner or later, all spells or events will be fully used, but Suggestion, which is more or less everlasting, offers an alternative that can be useful to prevent wasting precious charges / events, at a low cost.

Palefang · 56
Am I reading this right? The first ability functions even when there are no charges remaining? — tbigfish88 · 13 12/13/17
Having just gone through The Dunwich Legacy with Akachi, I can say that this card will be wondeful for her. — Panzerbjrn · 23 12/21/17
Tbigfish88 I would read it that way as well, in contrary to lockpick which is mechanically similar but gets discarded at 0 charges. But that looks unintended — dyos · 7 1/5/18
I believe it is written as intended. Once a turn, you get an awesome evade, always. You also can cancel attacks, but that's limited by charges, which may be lost by the first ability. — CSerpent · 106 2/6/18
Yes, most spells ar — Blackgreywhite · 1 2/12/18
Yes, most spell assets aren’t discarded when out of charges, plus the Exhaust action doesn’t say ‘spend 1 charge’ like Firearm cards do. So the infinite Evade boost looks intended. — Blackgreywhite · 1 2/12/18
Infinity booted evade makes this card really damn good! — Euruzilys · 11 5/19/18
But then if you fail with no charges what happens? I think the ability is dead with no charge — infra_dat · 1 7/18/20
Only the reaction ability does not work once this is out of charges, and it is entirely intentional. If you look at the level 1 version of Suggestion you'll see that it — much like the level 1 version of Lockpicks — has the text "If <the card> has no charges, discard it". There is no charge cost to initiate the first triggered action ability on the card, so you may continue to do so forever. 4XP nets you 3 cancelled attacks and permanent evade-o-rama. — BlankedyBlank · 12 8/21/20