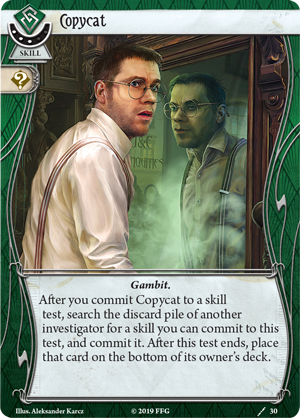 This is a terrible card. Despite it's name and assumed intended effect, it cannot copy any actual cat cards.

Such a weird design decision. There is definitely design space for some kind of cat-copy mechanic in arkham, surely they put something of the sort in Barkham horror.

This card has interesting applications in supporting a teammate, as you are not limited to committing it to your own tests. An investigator’s deck typically has more skills suited to their own specialty than someone else’s. This means you can help out your guardian pal with their own Vicious Blow, recommit a seeker’s Deduction to their next investigation or even fill out a fellow rogue’s poker hand if one of their Aces ended up in the discard.

Kergma · 3
that's a clever idea. when i tried testing this i was mostly just using it to steal Eureka or Inquiring Mind from Minh's discard. it did work quite nicely for that. i even used it to get extra clues a couple times with Deduction — Zinjanthropus · 165 5/21/20
Not fully convinced that works. Copycat says to search for "a skill you can commit to this test" and you can't commit more than one card to a teammate's skill test, so after you've committed Copycat, no skill card is one you can commit to that test. Other users seem to have interpretted Copycat in a different way, suggesting that Wini wouldn't "control" the second skill card committed by Copycat, but I think given the card text states "you" can commit, the more natural reading is that you (the owner of Copycat) control and commit both cards. FAQ ruling pending! — Trinity_ · 175 8/2/20
After I commit "copycat" to a skill test,search the discard pile of another investigator for the "Leadership",and commit to the test. This test is successful. Can both two investigators gain 2 resources? — QQ5623 · 1 8/5/20
@QQ5623: I think that will depend on whether you or the other investigator is considered to be in control of the skill. My first instinct was that the one who is playing Copycat is the controller (controlling another investigator's card is not unprecendented), but others have cast doubt on that. I think we'll need to await a FAQ to be sure (or more likely have to send a query once the decks are released). — Zinjanthropus · 165 8/5/20
@aeongate: Thanks for pointing that out, I had actually not seen that line in the rules and had been playing it wrong. Still I do think this might work (pending FAQ). I’d skip past the arguments over who controls the card and move straight to the “specific overrides general” part of the Golden Rules. The language in the skill test timing section is permissive, saying each other investigator “may” commit one card. Nothing forbids you from committing additional cards if explicitly told to do so, as this card does. At that point, it’s a matter of whether you “can” commit it, and it’s logically consistent with the rules to say you can or to say you cannot. So... yeah, needs FAQ. — Kergma · 3 8/16/20
According to the leaflet thing that comes with the Wini deck, Copycat triggers Wini's ability, which implies to me that Wini is controlling the skill committed from the discard — Zinjanthropus · 165 9/3/20
If you look at ST.2 in Appendix II, you'll find that it doesn't say you can't commit more than one card to a skill test another investigator is performing, it merely fails to permit you to commit more than one card. (Contrast "Each other investigator at the same location as the investigator performing the skill test may commit one card with an appropriate skill icon to this test." with "Cards that lack an appropriate skill icon may not be committed to a skill test.") That, combined with the insert for Wini's deck, implies the following to me: 1. Although you can normally only commit one card to another investigator's skill test (and only if they're at your location), that only applies to cards committed as part of the ST.2 framework step, not to cards committed by card effects like Copycat or Daredevil. 2. The investigator committing Copycat controls the skill committed by its effect (which so far is only relevant to Wini's ability). — Thatwasademo · 39 9/17/20
Compare dealing damage to an enemy -- the only way the game rules normally allow you to do so is as part of a successful fight action ("Fight Action" in the glossary), but events or abilities on assets can also deal damage; this isn't really a case of the Golden Rules applying since nothing says you *can't* deal damage, it's just that you can't modify the game state unless either a rule *or* a card effect allows you to do so. — Thatwasademo · 39 9/17/20
Regarding the interpretation that you acquire control over the card that you are committing through copycat, if that was true, then you wouldn't be able to copy "Neither Rain nor Snow" or "The Home Front", becase the FAQ specifies that you can never gain control of a signature card. — Killbray · 54 12/16/20
2

Now that scroll of secrets let you grab the bottom of peoples decks, this is very handy to get someone’s card from the discard pile back into their hand.

Update: This is pretty expensive, but it could be amazing clue tech for a seeker (or Roland). Adding deduction, Take Initiative or perception back into their deck means they can find it with practice makes perfect. That means you’re giving potentially --three-- uses of it. If everything goes right on Deduction(2), that’s a six clue shift for one skill card. If you team with Mandy, pick two cards!

But if you’re teaming with a mystic and/or a survivor, you might want to pass on this one.

Buy this if you have Stella Clark in your team and enjoy committing Neither Rain nor Snow. Same goes with Nautical Prowess if Silas Marsh has managed to drop it.

Other than this, my favorite targets are Daring, Vicious Blow, Deduction, Brute Force, Expeditious Retreat, Sharp Vision, All In, Defiance, Fearless.

EDIT: Signature cards cannot be controlled by anyone other than their owner. Copycat cannot be used on Nautical Prowess, Neither Rain nor Snow.

Erdjo · 246
I feel like Stella might be a little peeved that she can't bring it back with Resourceful or True Survivor any more. lol. Hopefully she has a Rabbit's Foot or something. Rise to the Occasion (3) also a very good target You'll get a guaranteed +3 on the test. — Zinjanthropus · 165 8/2/20
Probably even worse for Silas (and his Elder Sign), actually, at least there are 3 copies of Neither Rain Nor Snow. Silas probably won't get to see his Nautical Prowess for the rest of the game. — Zinjanthropus · 165 8/2/20
@Zinjanthropus I already played Stella with a Winifred who copied my signature 4-5 times a scenario with Copycat - you will see it many times. It's really not what I want to Resourceful anyway. — Erdjo · 246 8/3/20
You are correct about annoying Silas by putting it out of reach though, but that's what rogues do - they make people mad for selfish gains — Erdjo · 246 8/3/20
It's true. I do really love how Rogueish this card feels. — Zinjanthropus · 165 8/7/20
A friendly mystic/seeker with scroll of secrets can easily overcome this problem. — jemwong · 76 8/14/20
As a side note, if you're playing with a Seeker who is running Surprising Find, it might actually be beneficial to bottomdeck that. Each time you find it in a search it's +1 to a random test, and +2 deck-thinning. — Zinjanthropus · 165 8/15/20
No love for The Home Front? — SGPrometheus · 554 8/28/20
The Home Front is actually a great idea! I'm sure Mark doesn't mind getting it bottomdecked. With his draw power he could maybe even find it again with Practice Makes Perfect later. — Zinjanthropus · 165 8/29/20
It should probably be a good backup, if your Seeker friend draws the tentacle while committing "The Eye of Truth". — Susumu · 150 9/23/20
1

This seems like a really good card for winifred. +2 minimum, you get to draw a card and can get this one back. Yeah for a few rounds this probably wont be good at the start but once cards like steadfast or unexpected courage are played this really develops quick.

vosh · 9
Does this combo with Winifreds passive? Do you control the other investigators card and thus draw a card simply by committing this from your hand? — misterdavidjaques · 1 4/16/20
it does say that you commit it to the test, so i think it actually does. i hadn't actually thought of that. — Zinjanthropus · 165 5/21/20
Upon inspection of the rules, I don’t believe this works. Nothing in the card’s rules says that you control the skill committed. Cards in discard piles are underway their owners control, and cards enter play under their owners control unless otherwise specified. In contrast, see “You Owe Me One!” that explicitly clarifies a change in control. While I wouldn’t be surprised if synergizing with her ability is intended, RAW I see nothing that makes this work beyond inference based on an understanding of the word ‘control’ that goes beyond the defined rules of the game. — Death by Chocolate · 835 6/2/20
Ah, that makes sense. Another question is, does that mean that your team-mate is not allowed to commit a skill to the test if you're committing a skill (that they control) from their discard (with Copycat)? Looking forward to some FAQs on this. Will probably be some time. — Zinjanthropus · 165 6/10/20
The leaflet thing says that Copycat triggers Wini's ability, so I would say that you control the team-mate's skill that was committed. — Zinjanthropus · 165 9/3/20
0

Obviously it's only good in mulltiplayer and you'll want at least one of your teammates to be running some good skills. Generally though I haven't found that to be a problem, there are plenty of good skills out there and even pulling out an Unexpected Courage nets you a boost.

Ideal targets are in Seeker with:

And not only do you get the benefit but goes back in their deck to redraw so between you and your teammate it's perfectly possible to play a single Deduction (2) 3 times per deck rotation.

The main downside is the XP cost which is prohibitive in Rogue with so many powerful cards to spend their XP on.

If you're Winifred Habbamock and one or more of your teammates has relevant skills I highly recommend including this card, it's both powerful and great fun to play!

If you're a different Rogue investigator it will still be good if your teammates have high impact skills but you'll have to carefully consider the XP cost vs other potential upgrades.