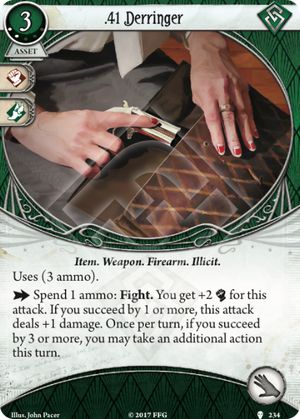 The Derringer caught a lot of flak for being "Unreliable" and honestly, it is probably deserved. When you include a weapon in your deck you count on that +1 damage so that you can reliably keep up with threats as they emerge from the encounter deck.

The upgraded .32 is a vast improvement over its predecessor, requiring only a +1 over your value is not only easier, but REASONABLE. Most tests you attempt succeed by at least 1 (if you succeed), which means statistically you will do the extra damage.

But lets just say you are swinging for the fences and the chips are down and lady luck smiles on you and you get that coveted +3 or +4 over the test. Go ahead and take another action!

The ability to gain an action is HUGE. That means if this triggers once, you made back the cost of "playing out" the derringer.

If you combo this card with sleight of hand or a skill like vicious blow you also might get a turn where you just blow out a test, do a ton of damage and get a follow up action.

For most rogues, this card is worth checking out, especially if you are already packing Sleight of Hand OR Extra Ammunition.

Also, Lola Hayes likes this card quite a bit as it is a great little weapon in her hands.

Plus, who doesn't secretly want to just slap down two pistols and pretend to be Jenny Barnes? Pew-pew!

Myriad · 1133
Also, while it would require a good fight or flight turn, Wendy could use this with Will to survive and just KO alot of boss monsters in 1 turn. Zzzzzip! — CecilAlucardX · 9 2/12/18
2

The way I'm going to review this card is by re-interpreting the text into three separate texts, one for each of the outcomes from success (every weapon does the same thing when you fail, so that's an un-necessary consideration). I'm also going to interpret "succeed by X", as "this test gets +X difficulty". This will turn a review of one weapon into a review of three weapon with direct comparisons to other existing weaponry, in an attempt to gauge the power-level of this card:

First, say you have a heavy aversion to risk, and really just want the cheap +2. This weapon might as well read "Spend 1 ammo: FIGHT, You get +2 for this attack", in this case. There exists one other weapon (as of Dream-Eaters) that provides a +2 boost without additional damage: Gravedigger's Shovel. A quick comparison shows that the imaginary .41 Derringer falls way short: for one less resource and two less exp, you get the same boost an infinite number of attacks, plus a little extra versatility to boot. So clearly you won't be getting this weapon for it's base effect.

Next, let's say you really like the un-upgraded .41 Derringer, and care little for extra bells and whistles. In this case, the text is equivalent to "Spend 1 ammo: FIGHT. You get +1. This attack deals +1 damage". Sound Familiar? It's a .45 Automatic, albeit for for less resource, and one less ammo. Sounds fair, right? Except the .45 Automatic costs no exp, so to be equivalent in power to a card that costs 2 less exp is a bad sign, and thus, this imaginary weapon also falls short.

Finally, the big one. "Spend 1 ammo: FIGHT. You get -1. This attack deals +1 damage. Gain an additional action (limit once per turn)". This would be the only weapon in existence that would reduce your for the attack, if it existed. And yet, if you're gunning for the biggest prize, and as proven in the prior example, you'll be playing with an inferior weapon if you don't, then you have to consider the difficulty value as three higher that it's actual value.

If, say, you want to succeed despite drawing a -3 (the staple standard for tests at medium/hard difficulty), then you want to have a final at 4 HIGHER THAN THE TEST. Not impossible, but damn are you shooting for the moon for this extra effect.

The funny things about rouges is, despite having the second largest select of weapons to guardians, not one of them have a value higher than three (until the Dream Eaters came out, I'm getting to that). Of the rogues that do have 3 , "Skids" O'Toole has access to guardian cards, Jenny Barnes can pull off some magic with Money Talks and Well Connected, and Finn Edwards does like his illicit card synergy. Whether that's enough, I'll leave to you, because personally, I'll not sold on the idea. A better candidate would be Leo Anderson, especially with Beat Cop, who, with all the expensive allies he'll undoubtedly have, might appreciate a cheaper weapon alternative.

...And then along comes Tony Morgan, blowing all other candidates out of the water. Unlike the others, he's a combat thoroughbred, unlikely to be doing anything other than fighting (don't you dare mention seeker Tony). He alone can make .41 Derringer work, in my opinion, and not a moment too soon, as I like the "succeed by X" archetype for rogue, but never really got to see the fighting version of it (alongside Switchblade), until now.

Lucaxiom · 3162
Except that the .41 isn’t any one of those three, it’s all of them at the same time. To put it another way, imagine the last version had the extra line: “if this attack fails, deal 1 damage and ignore retaliate (2 damage if you failed by 2 or less). Even when it doesn’t hit the highest mark, it’s still doing something, and even a 3 base combat rogue shooting this at a 2 fight enemy gets the extra action 25% of the time. With any boosting, a 3 combat rogue can see the same odds against the mid-campaign typical 3 or 4 fight enemies. — Death by Chocolate · 1105 10/24/19
Death by Chocolate has the right analysis here. The composite between the effects is significant, also it's important to remember that there are a number of succeed by X effects in rogue (All In, Lucky Cigarette Case, Watch This) which are likely to be employed in tandem with this card. — Difrakt · 1127 10/24/19
The insurance against failure is a fair point, so too is the anecdote about synergies with the "succeed by X" archetype. My point about it's power level still stands however; if you play this weapon, fire all three shots and don't get at least one instance of the best outcome, you would've been better off investing into other options. A 25% chance of this happening per try over three tries puts you at approximately 58% chance of not having the worst outcome occur; whether one trigger of the additional action is enough to justify the asking price is still debatable. — Lucaxiom · 3162 10/25/19
Part of the issue with comparing this to Gravedigger's Shovel and the .45 is that you're comparing it to out-of-faction weapons. Sure, Skids can take the .45, and Finn can take the shovel, but some rogues don't have access to either of those factions. There really isn't a lot of great competition within the rogue faction that isn't more xp, requires greater success (Switchblade, also is more expensive with taboo), or gives you a lower boost. Also, even if you're just trying for the +1 damage, you're probably going to sometimes get the extra action. — Zinjanthropus · 199 5/18/20
You can't break a card up like that to get its true value, especially comparing it to different cards each time. I also believe you are strongly underestimating Rogue's ability to boost their stats — Tilted Libra · 24 5/27/20
While you could break it down as an individual card, most likely your average rogue is specifically focusing on the extra action by playing other cards. Play this with Quick Thinking, Overpower, and Watch This and suddenly your gun is giving 2 actions, 1 card, and 3 resources. I get that everyone is happy to break down how many actions/resources/cards you spent to get to that point, but this game lives in the burst, too, not just in the tempo, and that burst can be a game-maker. Do all that with Double or Nothing on a 2 fight enemy with a 3 STR rogue. — Time4Tiddy · 187 10/12/20