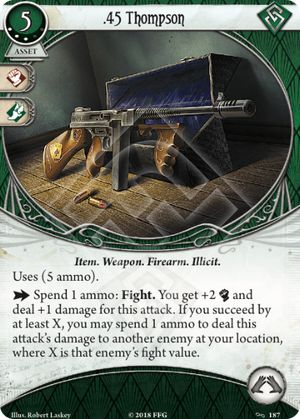 This card is for Tony Morgan, at least until Michael McGlenn comes out. And he’s going to have to sacrifice for it: it means putting away high to-hit, low ammo/damage pistols for a street sweeper. Which means restoring bounty contracts is going to be more difficult, but at the point where you’re taking this into your deck, you should have ways to get supplemental cash and actions. And it works with taboo Sleight of Hand.

The .45 rewards you for thinking indirectly. You want to aim it at the easiest to kill enemy, and use the difference to slay something else. (Better to hit an easy enemy and not succeed by x than miss a powerful enemy.)

In the best case scenario, you’re killing rats to hit the boss, or using marksmanship to snipe aloof will’o’wisps to damage an annoying enemy on a teammate. You are saving yourself an engage action and doing two fights at once.

The trade-off is it’s going to be expensive, and without supplementary ammo cards, you’re dropping a lot of XP on the floor.

Remember, you do the initial damage to the secondary target; if people give you vicious blow, blessed ammo, enchantment, or other bonuses, that damage transfers. You could theoretically use Lita Chantler's monster damage bonus on unique Cultists.

And you can shoot it out of a moving model-T while cackling madly in “Horror in High Gear”.

So the upgrade to the Thompson has not generated as much buzz as the version, which doesn't surprise me too much. For 3xp, it drops a resource in cost and gains a niche but powerful oversucceed effect. Altogether not mind blowing.

This card is very interesting to me, not necessarily because of its power or interactions in the game right now but because of the sort of scenario it seems to be designed to handle. At the moment, we dont have a Rogue with a better stat than 3. This means that against moderate to high fight enemies its going to be pretty tough to oversucceed enough to get the benefit. If you're engaged with two 3 fight enemies then you need to hit 6 in order to get the action compression from the Thompson. This means you'll probably want to be pushing your initial value up to 9, a full 4 points over the bonus provided by the gun itself. I think this high cost to using the gun in this manner, even for just medium fight enemies, relegates this sort of plan to a desperation manoeuvrer. Where the gun does shine however is in situations with multiple low fight enemies, or at a push ones with combinations of low and medium fight. The Secret Name comes to mind as a scenario where I imagine this card would do a lot of work.

One powerful upside to consider for this card is that the second enemy you choose doesnt have to be engaged with you. This makes it particularly good for dealing with, say, the awful bastard birds. Unfortunately its usefulness for dealing aloof enemies other than the birds is a little limited again by the earlier point about Rogue values. A lot of the aloof enemies that you'd be hoping to use this against aren't slouches when it comes to combat either, so the Thompson is not going to be a reliable way to handle them for the most part. Also, for this plan to even be possible you need to be engaged with another enemy at the same location, which further limits is application.

The resource discount is significant, 6 down to 5 means that this can be played turn 1 without having to waste an action gaining resources, which is always a plus. This same discount was worth 1xp on Leo De Luca so I dont think I'd spend 3 for this benefit alone, but it does sweeten the deal somewhat.

In terms of investigators that can make use of this, "Skids" O'Toole is the archetypal "combat rogue", but then he has access to the .45 Automatic which does a large percentage of the work of the Thompson while leaving a hand and an xp free for Lockpicks. Jenny Barnes doesn't have a lot of better options for weapons, so I can imagine it being a reasonable fit for a Jenny deck that's not interested in Lupara. Perhaps a Jenny deck that's looking to be a dedicated fighter and so doesn't want to be limited to single turns of effectiveness with Sleight of Hand. As for the third 3 Rogue, Finn Edwards: both version of the Thomspon are actually Illicit. This means that the version of the Thompson has to compete with the much flashier one. I dont think the Guardian version is always better, but refunding its resource cost is a real bonus for a Rogue that cant take Hot Streak. That's assuming Finn wants either of them of course, which is a little doubtful given that he is the poster boy for Lockpicks and cant take Bandolier.

All in all, a pretty interesting option that opens a little more space in the rogue weapon pool, but one that I thing struggles to find a home among the investigators we currently have. I think when a 4 rogue who can more reliably trigger the bonus effect is released it may be worth revisiting this card. Either that, or when we have a cycle focused more on swarms of enemies.

birdfriender · 217
I've been having some fun with this in Skids in a 4 player game, where I'm putting a lot of +combat effects in my deck, with the plan of consistently hitting the bonus. The extra attack does the damage — legrac · 114 6/7/19
--the extra attack does the damage of the primary one, so it's really good with Vicious Blow, and awkwardly, Marksmanship. I find myself burning out of ammo really quickly though. — legrac · 114 6/7/19
Well Connected in a big money rogue can get high as needed for combat once per turn. — jmmeye3 · 594 7/11/19
Tony Morgan and his 5 Combat are gonna have fun with this. — Amante · 4 7/13/19
Might work well with the recently teased Sharpshooter. Rogues have a lot of good options for boosting agility. — Zinjanthropus · 212 4/17/20
3

I'm working on a rich over succeed Tony Morgan combat build that wants to use this as one of the primary weapons. Sawed-Off Shotgun will make it's way in too as it also wants to over succeed. Hard Knocks will probably be a huge get in this deck as well.

A couple of nifty combos in the deck around this card:

Some core cards and why you'd choose them:

I'm not sure yet if the deck is going to be great but looking at this card I do feel like it has potential, especially in campaigns with lots of enemies like Dream-Eaters. I feel it particuarly pairs well with evasion heavy investigators such as Trish Scarboroughor Ursula Downs.

Tacomental · 20
I think Swift Reload is another good way to replenish ammo. Of course, doubled Contraband is best, but Swift Reload is similar effect to play 1 Contraband, and you don't need to wait Contraband before shooting your gun. — elkeinkrad · 407 10/8/21
I think the new Rouge Tarot the knight will fit well into this build if you can afford the xp — Tharzax · 1 10/12/21
I played Tony in a 3P game using the Rogue .45 and was delighted by how often I got to use the double-shot, which I initially thought was just going to be a once-in-a-while treat. I can confirm that you absolutely are going to need Contraband or Swift Reload- the bullets go away -fast-, and in 3P I reliably empied the clip twice or more per mission. Can also confirm that Narrow Escape is MARVELOUS with this gun- it allows Tony to drag an engaged enemy into another room with an enemy, dodge the AOO, and gun them both down in one action helped by the +2. — HanoverFist · 551 10/19/21
1

This card is disappointing. You are spending an additional 3 XP, and you are getting nothing but -1 cost and a difficult to use limited special ability.

First, fighting more than one enemy at once is something that happens, but it is a lot less common than fighting one opponent. Two, even if you are fighting two opponents, you probably have to hit by quite a lot to activate the power, it isn't that easy to do, you’d better be pretty great at fighting. Three, even when you get into the magic situation and it works, it still costs ammo, so all you are saving is an action. And other cards which give “two actions for the price of one” have the advantage that you only have to spend your boost cards on one action instead of two. but in this case, you have to hit by so much to trigger the special power, that it probably would require fewer boost cards to hit twice normally then to make the one really good hit that activates the power, so really, you aren't gaining much other than saving an action.

Now, it is true that saving an action in combat is a particularly good time to save an action, but this card just places too many limitations on that saved action. As an upgrade, compare it to .41 Derringer (2), which has a much easier to activate general purpose way to give you an extra action, and gives you an increased hit bonus. This upgrade costs more XP and does a lot less.

ChristopherA · 97
Even in two player, tony draws an enemy, the seeker draws an enemy, tony then kill's both with a single action with no risk of hurting the seeker. When I play the monster slayer in a team I am shooting over allies constantly to save them, if you are luck enough that enemies only ever show up one at a time this is still 5 bullets for 5 resources, you only get its "downside" when things are going great to begin with. (so in reality to do what this does you're trading boosting to a high number to save two actions) — Zerogrim · 262 6/7/21
Tony hates this weapon for several reasons. Firstly, his ability works for fighting and engaging, so the need to hit another enemy on the same location is reduced. Tony's 5 fight also makes him an eays place to run oversuccess cards which keep his actions strong and allow him to take even more of them. Tony also tends to like one handed weapons a lot more- whether it's Switchblade 2, Knuckleduster, Timeworn Brand, or his own signature, Tony tends to prefer having multiple options instead of being constrained by a 2 handed weapon. Wors to fall though is that this weapon is ridiculously inefficient compared to most upgrade weapons since it requires an additional ammo to even use its ability, so you're not really getting much in terms of compression. Compare this to the Guardian version, which refunds itself allowing you to easily set up another weapon, whereas this just burns through itself slightly faster, which is heavily undesirable for a two handed weapon that forces you to forgo any backup. Compare this to Switchblade 2, Lupara, Mauser 2, or .41 2, all of which are way more appealing to me than this. — StyxTBeuford · 12744 6/7/21
Worst of all*, excuse me — StyxTBeuford · 12744 6/7/21
I agree that it's very rare case to use spend 2 ammo. However, it has high potential because all additional damage from other card are also applied at second shot. With Vicious(2), your damage is 4+4. With Enchanted Thompson, your damage is 3+3. — elkeinkrad · 407 6/8/21
I think the only scenarios where I would consider taking this upgrade are the one with numerous easy to hit swarming enemies — Tharzax · 1 6/8/21
The damage doubling is definitely neat. Maybe in a Skids deck with Well Prepared and weapon upgrades like Reliable? — StyxTBeuford · 12744 6/8/21