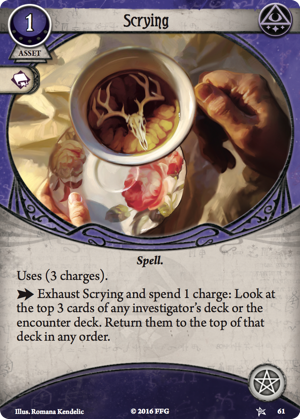 Most likely you don't have to read this review to know how powerful Scrying is.

Everyone who played The Lord of the Rings LCG by Fantasyflight games over the last years knows what nasty stuff the encounter deck will throw at you to ruin your game and the same goes for Arkham Horror. (Everybody who got busted up by Umôrdhoth's Wrath please raise your hand.)

Scrying let's you do the latter 2 things. Knowing that a very nasty thing will happen in 3 rounds (or that it won't happen) makes it a lot easier to plan ahead and decide what cards to play or to keep in hand. "Burying" a particular nasty enemy or threachery to delay it being drawn for like 8 rounds and at the same time controlling in what order the next 8 cards from the encounter deck will be drawn is even stronger.

After using Scrying, you know its safe when to to play Drawn to the Flame, because you plan using it knowing that you will draw Obscuring Fog at a location with no more clues on it. Or you can just prevent Umôrdhoth's Wrath coming into play for a lot of rounds. And as a cherry on top, Scrying let's you take a look and order the next 3 cards in the investigator deck too.

For me, Scrying is an almost auto-include for every investigator whose deck building rules will permit me to use it... IF I'm playing solo. Due to the fact that more players means more draws from the encounter deck each round, Scrying sadly loses a lot of its power in multiplayer games. If the team of investigators has to draw 2-4 cards from the encounter deck each round, Scrying just can't keep up. In solo-play however, this will be a card that we will be still using for years to come.

Heyenzzz · 4274
As the player count increases, Scrying changes from being about delaying encounter cards, but rather assigning them to players who can best handle it. For example, setting it up so that Rotting Remains goes on Agnes instead of Roland can be a life saver. — sacrelicious2 · 40 12/2/16
Or serving Roland with a juicy enemy, while he's waiting for him on a location with a clue. — Onetribe · 259 12/23/16
I DO have to read this review to know your opinion on how powerful it is. I've read it twice and I'm still convinced that its not worth taking in any deck I've ever built. 4 actions and one resource to ... to achieve what again, to slightly delay something really bad in exchange for something moderately bad? I'd rather use those 4 actions and resource to prepare myself for that nasty thing in the encounter deck, whatever it may be, whenever it may appear. And using it on an investigator's deck is comparable to Old Book Of Lore except you don't actually even draw the card until upkeep. Very poor for the use of an action. I could consider the upgraded free action version for Agnes with Peter Sylvestre. — shenaniganz11 · 9 10/30/20
I hear you but the power really goes up in a multiplayer game. Think of it more like giving the right disaster to the right player. As mentioned above feeding Roland a bunch of monsters for example. I agree in a single player game it's much weaker. — Titar · 1 3/20/21