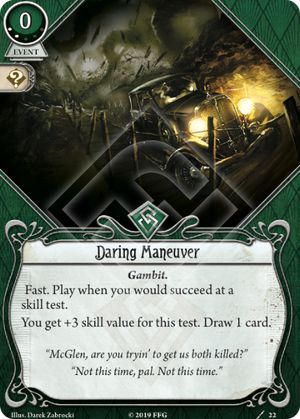 To really justify Daring Maneuver 2, you have to figure out exactly how important it is to have the insurance to succeed by 3. The question you have to ask yourself in a deck where you take the original is whether to upgrade it to this or to swap it for something more practical. Winifred Habbamock and really any skill happy Rogue probably took the og just for the pip, as it does suffer from the fact that, often instead of holding it in your hand, you could've just committed it, and that margin of +2 versus +1 is really narrow. +3 vs +1 is, of course, much nicer, and it drawing you a card means you get a much larger incentive to hold it back instead of commit it, which means it really should only be used to help your other succeed by triggers, and NEVER committed. The weirdest thing about this upgrade is that, even if you have no triggers, it at worst just draws you a card "actionlessly" (most likely you took an action to do a test, but assume you would've done this test anyway) once you succeed any test, which is solid deckcycling on its own. So, let's look at the triggers available:

So, what did we learn here today? Daring Maneuver 2 seems like it'll be a very helpful cog in Succeed By decks, however its usefulness depends heavily on the number of triggers available. A lot of Winifred Habbamock and some Finn Edwards and Tony Morgan decks will probably find it worthwhile, as well as some future decks featuring Trish Scarborough or her deckbuilding mirror. The big competitor here, as mentioned several times is Three Aces, though one could make an argument that the two could coexist in the same deck just fine. Daring Maneuver 2, after all, at worst, cycles you into your Three Aces slightly faster, and it's not like you can constantly trigger either throughout the game, so having both on hand to keep things moving is fantastic. Such a deck would benefit well from a lot of the new Seeker cards, especially Cryptic Writings, so definitely look out for such shenanigans come Innsmouth.

StyxTBeuford · 12504
This is a good analysis, I think. I have not yet been able to fit this into a deck, even in Wini, but I think there's a lot of potential. One set that is particularly interesting is Parallel Skids, who can take 4 Daring Maneuvers (2 of each) and up to 6 Luckies, so I think he's be a good candidate for a succeed-by deck where you're usually just barely passing tests and using Daring Maneuver to trigger your effects. — Zinjanthropus · 165 9/8/20
I keep forgetting about parallel gators. Yes, absolutely, look into both this and Lucky for Skids. — StyxTBeuford · 12504 9/8/20